As California wineries lose insurance, some fear this fire season will be their last 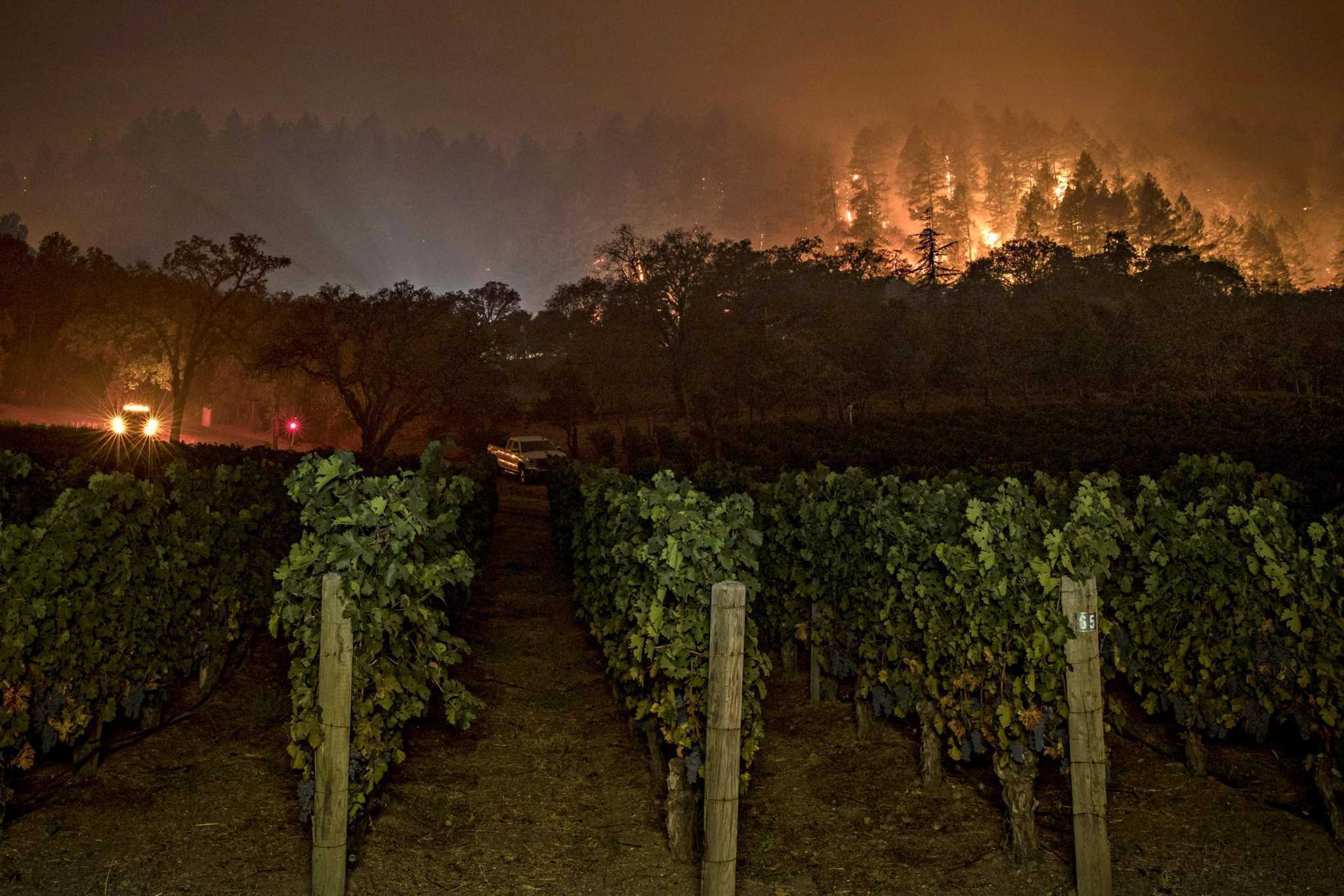 The annual premium to insure his small vineyard and winery in Placerville (El Dorado County) had risen steadily over the last three years, from $7,000 per year to $8,500 to $10,000. After last year’s catastrophic fire season, “I figured, maybe they’ll even rise by 50% or 100%,” said Naumann, the owner of Newfound Wines.

Instead, his fire insurance was revoked entirely. When Naumann’s broker tried to find other carriers, he met more denials. For now, he’ll be entering wildfire season uninsured.

“It’s completely changed the game for me,” Naumann said. “If a fire tore through and destroyed everything, it would be a deal breaker for Newfound.” Without being able to recoup the value of lost equipment, buildings and wine inventory, he believes he’d have to shut the winery down.

Across California, as peak wildfire season approaches, many vintners in the state’s $40 billion wine industry are unable to protect themselves from fires in several crucial ways. Winemakers here were already vexed by smoke taint, the pernicious phenomenon in which wildfire smoke can imbue wine grapes with unpleasantly smoky flavors, which forced many to abandon their entire production in 2020. The scientific mechanism behind smoke taint remains poorly understood, despite the huge financial toll it’s taken and may well take again.

With a severe drought and a fire already sparking in early July, the insurance difficulties underscore a challenging reality: California wineries have very few ways to prepare for a worst-case wildfire scenario this year. From Temecula (Riverside County) to Paso Robles (San Luis Obispo County) to Mendocino, some among the state’s more than 4,000 vintners are feeling powerless to protect their properties and their businesses.

“My vineyard is surrounded by thousands of acres of trees. It’s set to go. It’s going to go in my lifetime, probably,” said Andy Peay, co-owner of Peay Vineyards in the Sonoma County community of Annapolis. Peay said he was dropped entirely from his fire insurance plan this year and has been unable to find another carrier willing to insure his property.

For decades, it’s been standard for many California wineries to insure their properties against wildfire damage, said Nicholas Svetcoff, a broker at Risk Strategies in Burlingame who works primarily with wineries. Because there were relatively few major wildfires affecting wineries, the equation worked well for insurance carriers. The 2017 season, when blazes including the Tubbs, Nuns and Atlas fires tore through Napa and Sonoma counties, strained that equation. That year, Svetcoff’s firm ended up with 180 claims totaling about $22 million — about two years’ worth of premiums for it, he said. “But you say, OK, that was a bad day, and we’re still profitable,” he said.

Then, last year’s wildfire season, in particular the Glass Fire, blew up the equation entirely. In Napa County, more than 30 wineries sustained some damage, many of them high-end producers selling bottles for $100 or more. When those wineries went to collect on their insurance, it was no small sum. “Each one of those wineries alone could be $20 million,” Svetcoff estimated. For the insurance carriers, “that’s not sustainable.”

Since then, some carriers that cover wineries have simply withdrawn from the market, including a program that Svetcoff worked with that insured 850 California wineries. Others may be limiting the number of wineries they cover to mitigate their risk, according to Janet Ruiz, a spokesperson for the Insurance Information Institute, which represents the insurance industry. She cited the example of an insurance carrier that went out of business after the 2018 Camp Fire because it covered many properties in one region.

The implications for an uninsured winery are far-reaching. Anyone with a mortgage on their property may be in violation of that agreement, because mortgages usually require insurance. And if a vintner decides to sell a property, the inability to insure the parcel may make it tough to find a buyer.

Wineries are hardly the only entities facing wildfire-insurance woes in California. Many homeowners, too, have had trouble finding coverage through traditional insurance companies. The state-mandated California Fair Plan is designed for them: a shared risk pool for people who might be denied by other insurers because they are deemed too high risk.

For now, however, most commercial properties — including wineries — are not eligible for the California Fair Plan. SB11, proposed by state Sen. Susan Rubio, D-Baldwin Park (Los Angeles County), would allow agricultural businesses to take advantage of the shared pool. Yet even on an expedited timeline, that’s unlikely to take effect in time for this year’s wildfire season. Some proponents are urging Gov. Gavin Newsom to fast-track the bill.

“You have a lot of wineries and other ag producers that are uninsured right now,” said Ryan Klobas, CEO of the Napa Farm Bureau, which represents the county’s agricultural businesses in public policy matters. “If fire season hits someone that was hit by one of last year’s fires, they’re going to be out of business.”

Vintners lucky enough to still have fire insurance policies not only face higher rates, they have to pay sometimes hundreds of thousands of dollars to do their own mitigation efforts, such as clearing brush. Hugh Davies, owner of Schramsberg Vineyards in Calistoga, which was hit by the Glass Fire last year, said his insurance premium was previously $200,000 with a $25,000 deductible. Now it’s $800,000 with a $500,000 deductible — and would cover just 20% of the value of his buildings if they burned. Davies took the deal, but “it’s not comfortable,” he said.

A few miles south of Schramsberg, Stuart Smith has been engaging in preparation efforts at Smith-Madrone Vineyards, which also narrowly escaped destruction in the Glass Fire. In addition to constantly clearing brush, he has installed four fire hydrants and five fire hoses, and has plans for more. Those efforts didn’t result in a lower insurance premium, however: He was quoted $54,000, up from $12,700, and decided that wasn’t worth it, so he dropped his insurance. Unlike most vintners, he has been able to get some coverage under the Fair Plan for his property, for a $37,000 premium.

Mitigation efforts only do so much; the most perfectly manicured moat of defensible space cannot always save a building from fire. Wildfires are often whipped by wind, and the gusts can carry embers or smaller pieces of flaming debris through the air that catch larger objects, even buildings, on fire.

“If we were to lose our winery without insurance, we’re gone,” said Smith, who started his wine business with his brother in 1971.

To many vintners, it may look as if their rates are suddenly surging because of the intensity of last year’s wildfires, but Ruiz said that the risk is actually assessed based on the cumulative record of the past 20 years. That means that insurance premiums could go back down if there are a few years of less destructive fires in a given region, she said.

But it’s clear that the state’s wine regions can’t count on that.

“We are living in constant fear now,” said Martha Barra, who was quoted a $290,000 premium to insure her Ukiah winery, up from $38,000 last year. “Everything is more extreme now — more winds, unusual frost events, all these wildfires. It’s all just such an unknown.”

None of this accounts for another impact of wildfires on winemakers: smoke taint, which can affect a vineyard’s crop even if the flames are far away. “If a fire starts in Lake County or Howell Mountain, there’s nothing I can do about it — I’m gonna get smoke,” said Smith, who had to scrap his entire 2020 vintage because it had been ruined by wildfire smoke.

Smoke taint’s true impacts remain unclear. U.S. laboratories can test for only a handful of compounds that contribute smoky flavors and aromas to wine. The wine industry still lacks a consensus around how to interpret smoke-taint test results, and smokiness sometimes doesn’t become perceptible until after the wine’s been fermented or aged. Efforts to improve the testing will take years.

Interactive map: The fires that have scarred Wine Country

There’s a widespread sentiment among wine industry figures that their situation can’t possibly continue to be this confounding forever. Surely, eventually, the industry will figure it out. It will determine a risk-assessment strategy that makes sense for both insurers and landowners so that vintners won’t have to fear going out of business every fall. It will learn more about smoke taint so that winemakers can reduce its effects.

“I might be naive, but I don’t think we’re going to be chased by wildfires every year for the rest of our lives,” Davies said. “My guess is we’re going through a phase. We’re going to figure out how to adapt.”

As fire season ramps up, wineries just have to hope that they’ll last long enough to see what comes next.