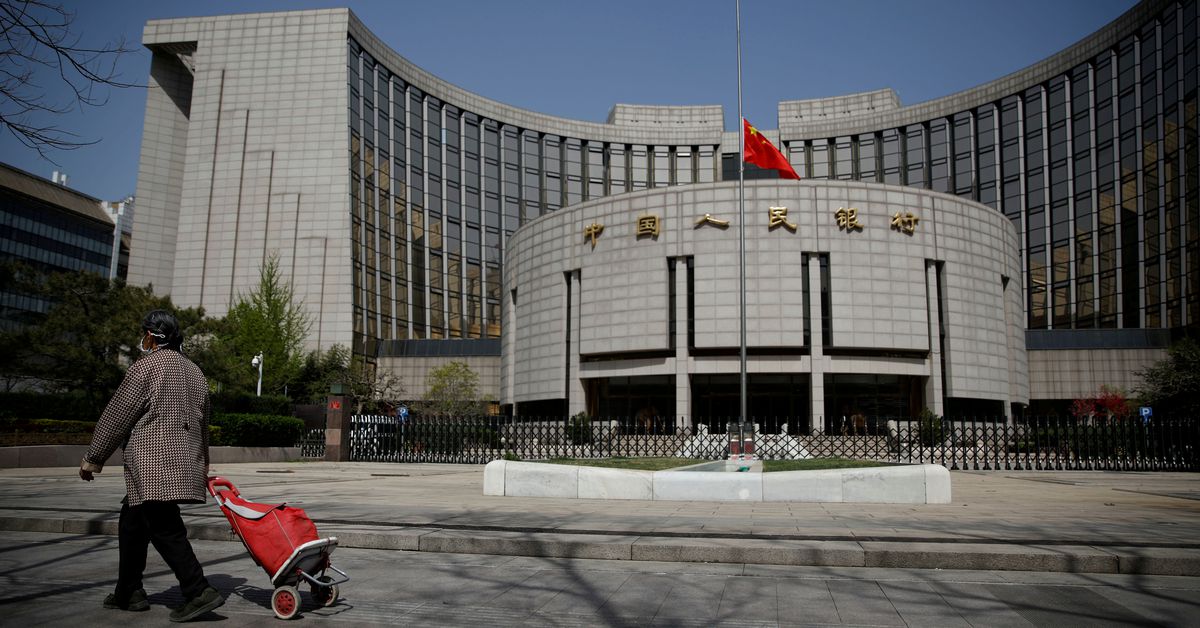 The Chinese national flag flies at half-mast at the headquarters of the People’s Bank of China, the central bank (PBOC), as China holds a national mourning for those who died of the coronavirus disease (COVID-19), on the Qingming tomb-sweeping festival in Beijing, China April 4, 2020. REUTERS/Carlos Garcia Rawlins

BEIJING, June 8 (Reuters) – New bank loans in China likely fell in May, a Reuters poll showed, as the central bank gradually scales back pandemic-driven stimulus to reduce debt and financial risks as the economy shows solid signs of recovery.

Chinese banks are estimated to have issued 1.41 trillion yuan ($220.54 billion) in net new yuan loans last month, down from 1.47 trillion yuan in April, according to the median estimate in the survey of 29 economists.

That would be lower than 1.48 trillion yuan issued the same month a year earlier, when policymaking was firmly in emergency mode to cushion the economic impact of the COVID-19 crisis and paralyzing lockdowns.

Annual outstanding yuan loans were expected to grow by 12.2% for May, continuing a slow but steady decline since February and easing from 12.3% in April, the poll showed. Broad M2 money supply growth in May was seen at 8.1%, the same as the previous month, which was the lowest since July 2019.

The central bank is trying to cool credit growth to help contain debt risks, but is treading warily to avoid hurting the economic recovery, which has been uneven.

Top leaders have repeatedly vowed to avoid any sharp policy turns and keep borrowing costs low, suggesting any rate hikes are far off. Authorities have told banks to maintain support for small firms but be more watchful about extending credit to hot areas of the economy such as property.

Finance Minister Liu Kun told the parliament on Monday that local governments would strengthen project reserves to made good use of special bonds.

“This relatively small revision might suggest Beijing is confident about the growth recovery and is becoming increasingly focused on controlling local government debt,” Nomura said in a research note.

Nomura expects the pace of government financing to significantly pick up in coming months, given that central and local governments have only completed 26% of net financing in the first five months this year.

Any acceleration in government bond issuance could help boost total social financing (TSF), a broad measure of credit and liquidity.

China’s policymakers are close to setting an average annual economic growth target of around 5% for the next five years, at the lower end of ranges previously considered as global risks cloud the outlook, policy sources said.