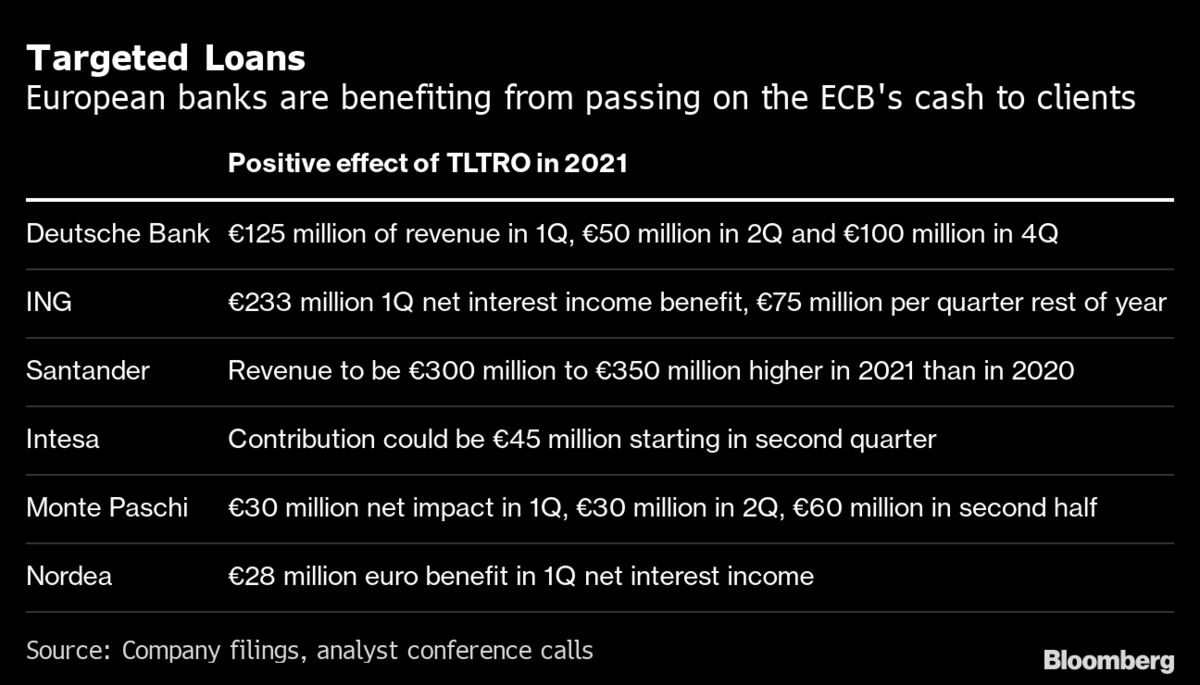 The European Central Bank is set to reward some of the region’s biggest financial institutions with more than 1 billion euros ($1.2 billion) this year in return for keeping up the flow of credit during the pandemic.

Six lenders including ING Groep NV and Deutsche Bank AG have disclosed their expected benefit from the central bank’s targeted longer-term loan programs. Together, the banks said they earned about 416 million euros in the first quarter while other lenders said they intend to book gains later in the year.

Seven years after turning banking on its head with the introduction of negative interest rates, the ECB is dangling enhanced subsidies to get banks to pump cheap cash into an economy lurching from one crisis to another. The benefits help offset some of the pressure from the ECB’s other policies which have eaten into lending profits and introduced costs for client deposits.

An ECB spokesman declined to comment on the payments. ECB President Christine Lagarde said in April that the program plays a “crucial role” in supporting bank lending to firms and households.

The ECB has offered several rounds of such targeted long-term loans. The latest allotment was in March when it made 330.5 billion euros available to banks. The favorable rates are paid subject to conditions on the banks reaching specific targets regarding the amount of loans they make to the broader economy.

The lenders benefit even more now than with similar operations in the past because the conditions were sweetened during the pandemic so that that they can borrow at an even lower rate than the ECB’s negative deposit rate. While the deposit rate acts as a charge on reserves, that’s more than outweighed by the generosity of the rate on the long-term loans.

“We don’t earn the money for free,” Deutsche Bank finance chief James von Moltke told analysts on a conference call last week. “The business is executing on lending, supporting clients, that allows us to achieve those thresholds.”

— With assistance by Sonia Sirletti, and Alexander Weber