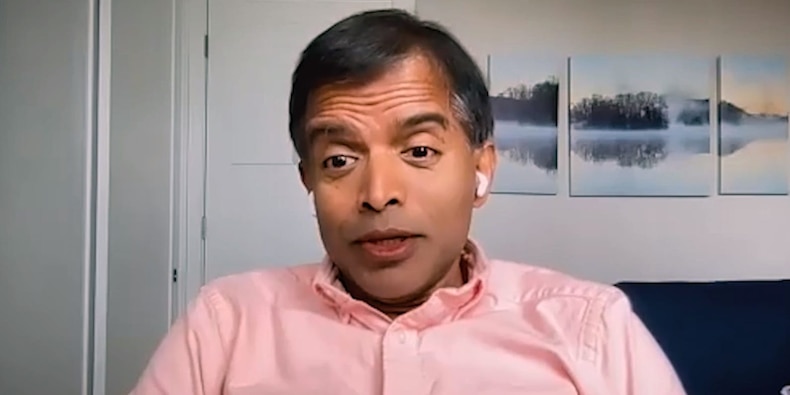 Finance professor Aswath Damodaran warned investors not to get complacent, weighed in on Tesla’s prospects, and argued that bitcoin fails as both a currency and a store of value in a RealVision interview released this week.

The professor at NYU Stern School of Business – whose nickname is the “Dean of Valuation” – also downplayed Warren Buffett’s recent performance, touted “big tech” companies as inflation havens, and cautioned that the Federal Reserve is overestimating its powers.

Here are Damodaran’s 11 best quotes from the interview, lightly edited and condensed for clarity:

1. “We’ve been in a market that’s been so good for so long that people have become sloppy and lazy – whether it’s in the form of SPACs or buying deep out-of-the-money call options. They think making money is easy, and markets have a way of fixing that thinking very quickly. Be cautious, because the exact forces that lead you to speculate might be the forces that hold the seeds for your downfall.”

2. “This market is being driven by mood and momentum, and even revenge. Think of what drove those Redditor investors to drive GameStop up: It’s not because they thought GameStop was worth more, they wanted to take revenge on hedge funds. Mood and momentum is being reflected in things like SPACs, or what happened to NFTs, or what’s happening to bitcoin.”

3. “Warren Buffett has been a pretty average investor for the last 20 years. The portion of the market which has delivered returns has been the portion of market that he’s been least comfortable dealing with – growth companies where it’s all about the future.”

5. “As a currency, bitcoin has really not worked, and it was never designed to work. When did you use it to buy a house, your lunch, your coffee? The answer is almost never, because it’s an incredibly inefficient currency.” – underscoring the effort and energy required to complete bitcoin transactions.

6. “Between February 14 and March 20 last year, we were in full-scale panic and stocks lost 35% of value, but gold held its value. You know what bitcoin did in those six weeks? It was down 50%. When stocks came back, bitcoin came back even more strongly. In 2020, bitcoin behaved like a very risky stock, not like gold, not like a collectible.” – arguing that bitcoin isn’t an uncorrelated asset that investors can use as a haven during crises.

7. “The story being told about Tesla by the bulls is that it’s not just an automobile company, it’s a revolutionary company that’s going to change the way everything gets done. The people who hate the company think it’s a scam, that Elon Musk is a magician who’s pulling wool over people’s eyes. Both sides are wrong; there is a good company at the core, but Tesla has lots of issues to get through to become a great company. I can’t get to a story where I can get a $600 billion value, but I can get to a story that gets me a $250 billion value, which a year ago would have made the stock cheap.”

8. “SPACs reflect other trends in society, including how social media and celebrity worship have taken over every aspect of our lives. SPACs are the coming together of that celebrity worship and social media into IPO investing.” – Damodaran gave the example of Shaquille O’Neal advising and promoting the SPAC buying WeWork.

Read more: The CEO of investment-research firm Fintel shares 20 heavily shorted stocks primed for a squeeze, based on an explorer he built to help retail investors identify opportunities

9. “The Fed is like the Wizard of Oz, its power comes from the perception that it has power. My worry is that the Fed is becoming so open in making statements that they really can’t back up with their power. I think they’ve drank the Kool-Aid. They’ve read their own press, they think they’re actually more powerful than they really are. That’s a dangerous place for a central bank to be.”

11. “The big tech companies are best equipped to deal with inflation. I wouldn’t go to a manufacturing company, I won’t go to Exxon Mobil. The Facebooks and the Googles, the Apples of the world fit the bill much better, because they have substantial cash flows. They also have pricing power.”