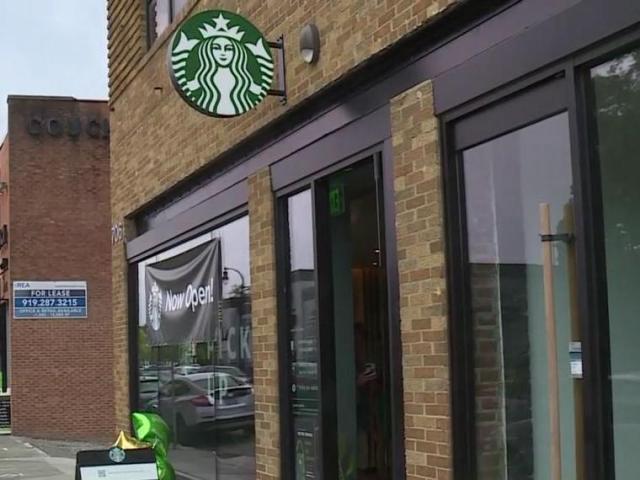 Durham, N.C. — A Starbucks opened Friday in Durham, but it’s getting a chilly response from many in the neighborhood.

That’s because it’s on Ninth Street, an area popular for its small, locally owned businesses.

“One of the major appeals to Ninth Street has been locally owned businesses for a long time,” said Daniel, who preferred not to give his last name to WRAL News.

The street is lined with a mural, a yoga studio and a hemp boutique.

As owner of the Triangle Coffee House, Jermaine Bantum said he found it a fitting day to wear a shirt that says “Support Local Coffee Shops.”

“I’m a little more annoyed than concerned that they’d moved in right next door to a local coffee shop that already exists,” said Bantum.

The recently opened Starbucks on Ninth Street is pick-up only. People order from the Starbucks mobile app, come get their drink and leave.

A spokeswoman for Starbucks said, “Pick-up locations began before COVID, and [they were] created to match evolving customer behaviors of the community that the location operates in.”

Duke University student Madie McMichael used to work at a Starbucks. She said the company’s culture is widely accepted in Durham.

“It’s nice to have one close by,” said McMichael. “I think that’s a huge part of the Starbucks training – community and having a safe place for everyone – so I think those ideas fit on Ninth Street.”

Bantum said that, despite the new Starbucks opening, Ninth Street patrons have been nothing but loyal.

“A lot of the community has rallied around us, and they made it clear that they’ll forever be loyal to Triangle Coffee House. We’re humble and grateful for that,” he added.

How Business Mogul Dany Garcia Gets It Done