TOKYO — Tokyo Gov. Yuriko Koike said Monday that promoting sustainable finance will be at the core of the city’s updated strategy to become a global financial center under the Tokyo Global Financial Center concept, which Koike introduced in 2017.

Developing finance for decarbonization “will lead to our increased presence as an international financial city,” Koike said in a video message at the Nikkei Virtual Global Forum. Tokyo will support the issuance of green bonds by covering some associated costs and also attract fund managers and fintech startups that have expertise in green finance, she said.

Another “pillar” for Tokyo’s reform would be to digitize the financial sector, such as through a fund of 2 billion yen ($17.6 million) to support fintech initiatives, Koike said. The fund is now being set up, she said, with Tokyo itself expected to put in 200 million yen.

Koike added that she hopes to lure more financial players and support their growth in Japan. She said one of the initiatives was set up this month to assist with costs that foreign companies involved in green finance face in starting businesses in Tokyo.

Akira Amari, secretary-general of the ruling Liberal Democratic Party, said he would make Japan more attractive as a global financial hub by “resolving all obstacles,” including in terms of living conditions as well as tax reforms. 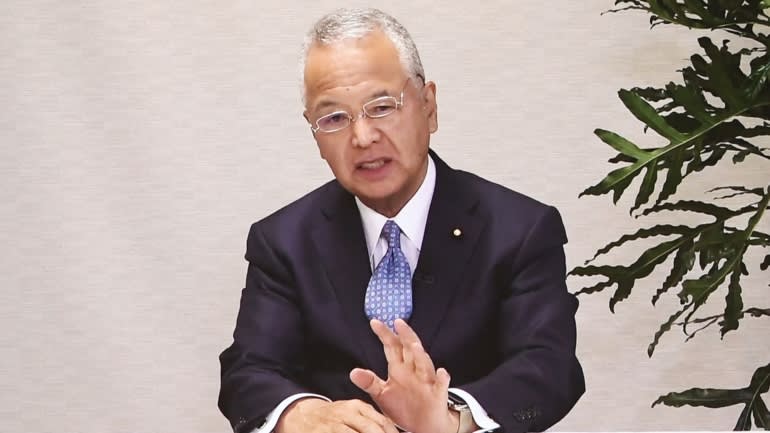 Amari emphasized that Japan has already decided on tax reforms, such as in the areas of inheritance tax and corporate tax. He said he would work on increasing the number of English-friendly hospitals and international schools in order to attract more international talent.

While Japan targets carbon neutrality by 2050, “investors must also do their part… working with business and with governments and being clear about the long- and short-term actions that they expect to see from government [and] from businesses,” suggested Fiona Reynolds, chief executive of the Principles for Responsible Investment, a U.N.-supported network of investors.

The annual Nikkei-sponsored forum took place against a backdrop of intensifying competition among Asia’s top global cities, including Hong Kong, Singapore and Shanghai, to attract financial services. While there is a division of labor among these financial centers, they all aspire to a leadership role in the region’s economic future.

As Asia’s only member of the Group of Seven, Japan is in a position to play such a role. But the country has many challenges to address first, including further liberalizing foreign investment and speeding up its digital transition.

“Japan has been successful in mitigating the shock of the pandemic to a certain extent,” said Toshiyasu Iiyama, deputy president of Nomura Securities, but cautioning that it has been less successful in resolving other issues, such as the excessive concentration of economic activity in Tokyo, digital transformation of government and promoting investment by the household sector.

“Tokyo has a deep and sizable economic hinterland, a capital stock that has the Japanese yen — a trusted store of value and hard currency, which is still very relevant in international reserves — and a well-established infrastructure of financial intermediaries with deep connectivity to global trade and finance,” he said. He pointed out, however, that the city is undeveloped in certain areas that “require clear-eyed acknowledgment and self-destruction to remake and redevelop” the financial industry.

Unless Japan speeds up its transformation, it will soon be overtaken by other emerging economies and China, in particular, warns Ayako Nomizu, manager at Principles for Responsible Investment. She points out that while Japan had more new PRI signatories than China in 2019, the following year, China outpaced it with 17 new signatories, versus Japan’s nine. So far this year, there are 11 new Japanese signatories, compared with 20 for China. “It is a matter of time before China overtakes Japan in terms of the total number of signatories,” Nomizu said. “Engaging with foreign investors may seem troublesome because of differences in language and culture, but it would be a useful experience for them to learn different points of view. Such dialogue would also help improve the transparency of Japanese companies, ” she said.

Japan has not been sitting on its hands during the past year, officials said.

In April next year, the Tokyo Stock Exchange will streamline its share listing system by consolidating the current five sections into three. At the top of the pyramid will be the Prime Market, which requires not only that issues be liquid and the issuer to have a large market capitalization. The company must have high governance standards and be capable of engaging in dialogue with global investors, said Hiromi Yamaji, president of the exchange.

Yasutoshi Nishimura, a senior lawmaker who served as minister in charge of Japan’s financial market globalization until recently, highlighted changes aimed at making the country a more attractive place for foreign bankers to live and work in.

Japan now offers foreign fund managers a visa that allows spouses to work without restrictions. These changes are “signs of how serious the Japanese government is this time around,” stressed Hiroshi Nakaso, former deputy governor of the Bank of Japan and chairman of FinCity Tokyo, a public-private group working to promote Tokyo as a financial center.

10 Fintech Companies to Watch in 2022: The Future of Finance

The $400k+ finance jobs that are almost impossible to fill